Home » A Man’s Self-image After Divorce

A Man’s Self-image After Divorce

The first time I met him, Ted wore disheveled biking clothes and his eyes were bloodshot from laser surgery a few weeks before. He sat hunched over his coffee cup, eyes averted, arms occasionally crossed over his chest. He seemed absent somehow.

Soon off the top of our conversation, he talked about his failed marriage and his imminent divorce. He said he numbed out and lost 20 pounds of muscle after his wife told him about her affair. Ted was a wounded man but he was ready to change. He just didn’t know how. 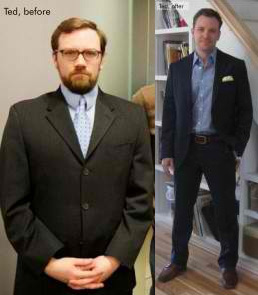 As a men’s image consultant, it is my job to transform men into their genuine selves, not the men society demands. I believe that all men are wonderful, but many have been influenced by outside forces that want to control and mould him into who they think he should be. From my perspective, this is abusive to men and their true nature which should be nurtured and celebrated.

Failed relationships with women tend to put the fear in men, and Ted said at the beginning of our first session to discuss his in-depth questionnaire, that I was the only person on Earth who knew this much about him, and he was a little nervous about that.

I assured his emotional safety and dove into the character of this interesting man. I began to understand what a handy and creative guy he is – Ted can take a brick chimney apart with his bare hands and he loves Steve McQueen movies.

Our bodies tell the truth even when we choose not to. Ted’s body language told the story of his battered emotions and fragile ego. I gave him my observations.

Females are born with the ability to read faces and respond to eye contact. Since Ted intended to get past his marriage and meet more women, I assigned homework to correct his gaze and come across more sincere and present. After a few weeks of conscious eye contact, Ted said that he felt “much more powerful” in his interactions with women who responded well to him.

When we moved into the physical part of process, we worked on posture, body consciousness, body proportions, and colour analysis that cleared his skin, brought his eyes into focus, and turned up his handsome. We were ready to build his new and efficient wardrobe to give him fewer pieces to fuss over, more outfits to wear, and a new way to express himself.

The lack of emotional support translates into a familiar but unjust message: an expectation of men to suck up the pain associated with divorce and carry on as if nothing happened. A social attitude like this is a catalyst for drug and alcohol abuse, depression, and in some cases, suicide. This casts a terrible shadow on our society and to my mind, is an example of sexism and emotional violence against men.

Toronto counsellor/psychologist, Bernie Golden, recognizes the social need to support men in their struggles “because men hurt and they deserve to have that hurt acknowledged; men should have an accessible and effective network of supports, and if they don’t, this can have a significant negative impact on a person’s emotional and physical health.”

Golden acknowledges the societal problems that arise when people’s struggles are not recognized or supported, saying that when emotional difficulties are ignored, we are all diminished and we all suffer from this neglect.

“My clients often express their frustration over the lack of support for men,” he says, “I hear their frustration when they reach out for individual support from friends, family, non-profits, organized groups, and professionals.”

Things are slowly changing for divorced men, but we have a long way to go.

Google anything about divorced men and you’ll find mostly legal and financial websites, some more bitter than others, to support men during their most difficult times. It is truly shocking how few services there are for the divorced man.

I did however, come across a women’s dating movement in the UK that has its sights set on divorced men.

The PUMAs – women on the hunt for Previously Married and Attractive men, see divorced men as having greater relationship experience, with “the likelihood they will be more sensitive to their partner’s needs, and that they have demonstrated serious commitment in the past,” says this Daily Mail story.

Though this is focused in Britain, I’m quite sure there are PUMAs prowling the North American continent as well, and after reading the news story, I can absolutely see why smart women would want a man experienced with relationships and with women.

Ted is on a new road now. He’s had a fun summer, feeling better about himself, juggling women that seem to have come out of the woodwork, and taking a new pride in himself.

“I think it’s well worth it for men to invest a few dollars in themselves,” Ted says in support of his broken brothers. “I went through the image process and I feel comfortable and confident and much more like the man I actually am, not the man my divorce made me feel like.”

Blog: In the Key of He

Canada’s first female men’s image specialist, oft-quoted in the media, inspiring professionals, politicos, and everyday Joes to perceive themselves in a new light: confident, distinctive, and comfortable in their own skin.

More from my site

Restoring Your Faith in Love: The Seven Steps to a Successful Relationship

Learn To Trust Yourself and Others

Longing for Dear Old Dad: Overcome a Broken (or Missing) Relationship with Your Father

Face Your Ghosts from the Past